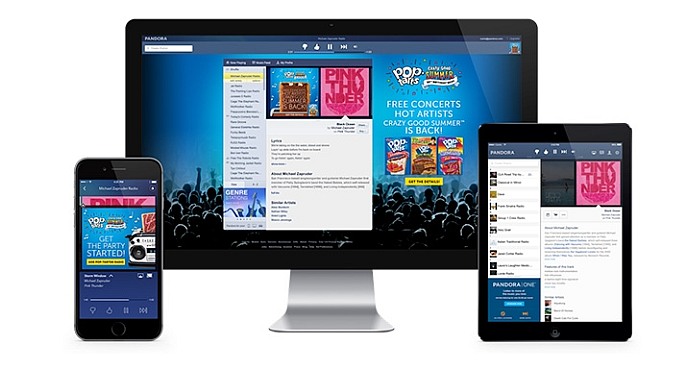 Pandora, the leading music-streaming service on the Internet, is seeking to modernize the advertisement experience that it shows to its 80 million monthly subscribers. Pandora is planning to show advertisements to its users that would be both more visual and interactive. The advertisements would feature images and sounds in combination with native video in the mobile phone application. The goal of this change, according to Jonathan Eccles, the senior product manager at Pandora, is to provide a “native but styled” experience to the users while they move around the mobile application screen.

It is very easy to think of Pandora as only a listening medium, after all it is a music-streaming service that lets users listen to their favorite tunes and can also recommend what the users might like. “And it’s a wildly successful listening format- we see over two hours of time spent per day per listener” said Jonathan in an interview, “but a tremendous amount of attention is also visual attention”. Pandora is rolling out responsive advertisements for its mobile application format which would automatically adjust itself to the size of the mobile display and would stay in the square space which usually displays information about the song being played. Pandora wants to move away from advertisements popping up while the song is playing. This new format would also apply to the images that usually accompany an audio advertisement and takeover advertisements that provide the first impression of a product. Another major update for Pandora is the offering of muted advertisements that will run in the realm of a responsive screen, which can be unmuted if the user wants to learn more about the product or service being offered.

During the pilot program, according to Pandora the number of users who visited an advertising company’s page whose ad lasted more than 30 seconds more than doubled. Pandora Radio App will launch a beta test for testing out the new format in August with nearly a dozen brands.

This website uses cookies to improve your experience while you navigate through the website. Out of these, the cookies that are categorized as necessary are stored on your browser as they are essential for the working of basic functionalities of the website. We also use third-party cookies that help us analyze and understand how you use this website. These cookies will be stored in your browser only with your consent. You also have the option to opt-out of these cookies. But opting out of some of these cookies may affect your browsing experience.
Necessary Always Enabled
Necessary cookies are absolutely essential for the website to function properly. This category only includes cookies that ensures basic functionalities and security features of the website. These cookies do not store any personal information.
Non-necessary
Any cookies that may not be particularly necessary for the website to function and is used specifically to collect user personal data via analytics, ads, other embedded contents are termed as non-necessary cookies. It is mandatory to procure user consent prior to running these cookies on your website.
SAVE & ACCEPT